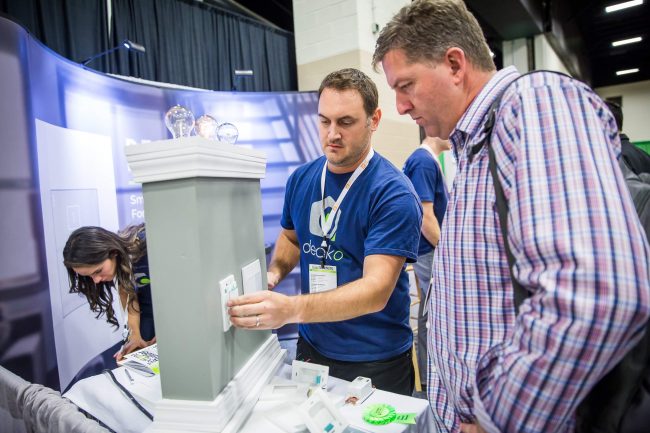 After the two companies connected at the TecHome Builder Summit, Deako products are now being installed in every new Lexar home.

Prior to the 2016 TecHome Builder Summit, Deako executives had eyed Lexar Homes as a potential partner. A relationship with the builder felt logical for the smart lighting company as both businesses are based in Washington and their operations are focused on the Pacific Northwest. Yet, it took a meeting in Fort Worth, Tex. for them to finally connect.

The Deako team attended the event to show off their new smart light switches and their technology to builders. As a relatively young company, it provided an outlet for more opportunity and exposure. But, Deako leaders knew homebuilders would be interested in the product if they could get them to see it.

“The reason that’s important to builders is because they can put in a low-cost system that’s fully upgradable,” says Deako chief revenue officer Wes Nicol. “The customer can upgrade before they close, or if their budget allows for it in the next year or two years.”

Lexar’s director of sales and marketing, Louis McKinney, was in Deako’s boardroom presentation and was excited by what he saw.

Following the event, teams from both companies held several meetings to discuss starting a business relationship. After Deako executives attended one of Lexar’s vendor events, the builder decided to make the smart lighting products a standard in all its homes starting in July of this year.

The base package includes a Deako light switch in five strategic locations in the home with two upgrade options – one is for all the main rooms in the house and the second is for the entire home.

“Deako allows us to do an install with our lighting configuration without much change at all with our current electricians,” says McKinney. “It allows us to add smart controls just by popping out a little module and replacing it. It’s stupid simple. They’ve installed it in a number of our showrooms and our model homes and we find the technology to be extremely up to speed.”

“I think we’ve developed a really strong relationship with Lexar,” Nicol adds. “We’re really excited to work with them. They’ve been a fantastic partner and we wouldn’t have been able to establish that relationship without TecHome Builder, so we’re really happy.”

Nicol believes Deako’s product sells itself once he is able to have the initial meeting with builders. But, getting that meeting in the first place can be a real challenge. So, the format of the TecHome Builder Summit, with the opportunity to demonstrate their product in the boardroom presentations, was the main catalyst in making this deal happen.

“These events are the greatest thing for us because you get to have that interaction,” says Nicol. “They get to see your product in action and you get to talk to them in a comfortable environment. For us, it’s getting that initial meeting in that kind of environment that’s so precious.”