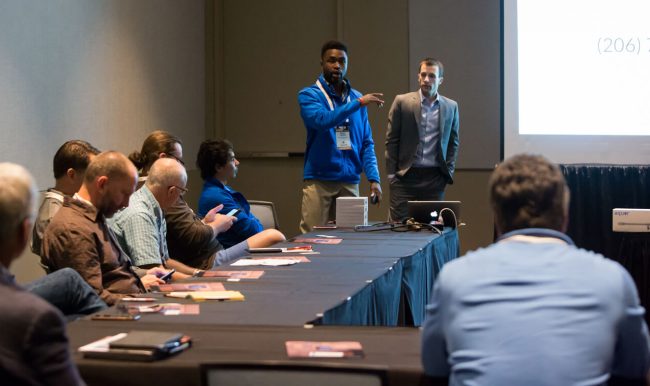 Aquor Water Systems signed on to the 2017 TecHome Builder Summit with the hopes of making some connections that would lead to new partnerships with builders. The Aquor team didn’t even need to leave Phoenix to ensure that would happen.

The company’s goal is to re-invent the way people access water. It does that with its revolutionary outdoor water system, the House Hydrant. The flush-mounted system utilizes an easy-to-install unit to connect a standard garden hose to a home’s water source and eliminate the hassles of a traditional hose bibb. The innovative twist-lock connection allows for instant water access.

The Aquor team believed showing off the system’s capabilities at the Summit would be a good way to reach the builders who would find it worthwhile, specifically the luxury builders who build primarily $1 million to $8 million homes. That’s exactly what happened in their boardroom presentation.

“It was crazy,” says Aquor VP of sales Shawn Tramble. “In our boardroom meeting, right as soon as it ended, one of the guests walked over to us and mentioned he was very interested in the product and wondered where he could get it. We briefly explained that we sell direct, so he decided to pull the trigger right there on the spot and ordered 75 units. It’s a pretty big order for someone who hasn’t tried it out before, but it just kind of shows the faith and due diligence that we do in the process.”

That builder was Steven Nakamura, president and CEO of Rachel Matthew Homes. He says, when he sees something good, why wait?

“Up until their presentation, I paid little to no attention to hose bibbs,” Nakamura says. “Their product is forward-thinking and something that could save me thousands of dollars in repair costs in the future.”

While this represents a great first step for Aquor, Tramble hopes that seed that was planted continues to grow over time.

“That’s a great initial order size,” he says. “Not only will it be a perfect showcase for other builders in his area, but once someone specs in to our product line, that’s going to lead to more than 200 units every year for that particular builder. And, once he puts it in his building, he’s going to be working with the rest of his building group to help us network and expand from there, which is very important.”

This deal with Rachel Matthew Homes is not the only lead from the TecHome Builder Summit that Aquor is exploring. Tramble says all of his one-on-one meetings went perfectly and the connections made there are promising. He says the days after the event would be spent shipping out 40 samples to those builders and, from there, he is expecting an order of at least 200 units.

Tramble says the reception to his company’s system has a lot to do with how applicable it is to everyone, regardless of where in the country they live, and how it can provide a lasting value to the builders’ clients. But, the format of the Summit itself also played a big role, with dedicated meetings with the exact people he’s looking to reach.

“Normally we’re hopping over different gatekeepers and trying to find a different decision-maker,” Tremble says. “Whereas, here, we got one-on-one time with the exact key decision-makers that we need to talk to from the beginning. So, they’re able to pull the trigger right there and then.”