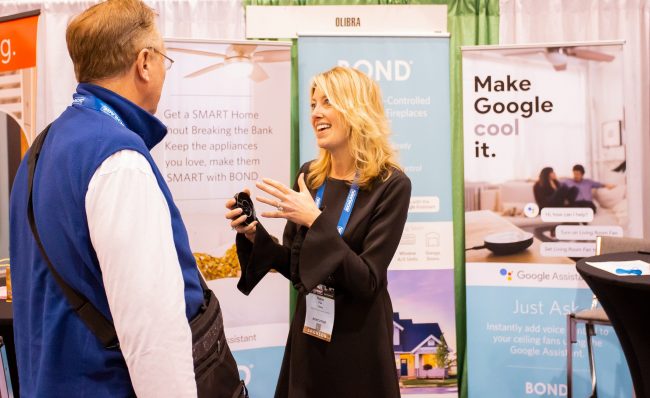 Representatives from the company and its BOND product held quality engagements with high-volume and luxury builders, which have led to meaningful next steps for all the builders with whom they met.

At the 2018 TecHome Builder Summit, there were representatives from 123 vendor companies from all areas of home technology in attendance to meet with the hundreds of builder guests. Among those sponsors was Olibra.

When marketing project leader Daria Fox opted to sign on for this year’s Summit, she was looking to connect with new builders and show them how they could give themselves a competitive advantage by offering affordable smart features to their homes. The company’s BOND product can provide them that solution.

“It’s a very basic technology based on Wi-Fi,” Fox explains. “You can connect up to either six remote control ceiling fans, gas or electric fireplaces, electric shades and split air conditioning units and give them Wi-Fi capability to make them smart. So, you can control them either on your phone or with voice control like Amazon Alexa and Google Home.”

To introduce the BOND to the Summit’s builder guests, Fox chose to focus on one-on-one meetings with both high-volume and luxury guests. She also took advantage of the event’s sponsor orientation, a 10-minute introduction to the Summit and best practices on strategies for sponsoring companies, to better understand how to maximize her time during those meetings, which she says paid off.

“This was really an unbelievable experience,” she says. “We’ve done a lot of tradeshows before and the format of this show has made it really conducive for us to have some meaningful conversations with homebuilders that we normally wouldn’t have been able to have one-on-one conversations with, and they were the right individuals from their organizations.”

Fox stayed busy even during periods in which she didn’t have any scheduled meetings. She says the Olibra booth was flooded with interested builders who wanted to learn more about a product that was creating buzz on the show floor.

Fox says she learned a lot from her first TecHome Builder Summit and believes she was able to provide valuable information to the builders with whom she met, as well. She says she received some great questions from those guests, which was a good signal of their interest.

Now, she heads back to her office to continue developing those relationships she was able to create at the Summit. With each individual with whom she met, she made sure to schedule a clear next step, whether it be a phone call or email follow-up. She even sent a couple of those emails before leaving the event.

It all adds up to what Fox considers a very successful debut event for Olibra. She already has signed on to return next year when the company will have some new products to roll out.

“I think this is really an incredible show and it’s a great opportunity for the builders to really find out what is out there for technology,” Fox says. “I would encourage anyone that’s even contemplating it as a sponsor that it’s not only worth the time, it’s worth the expense.”