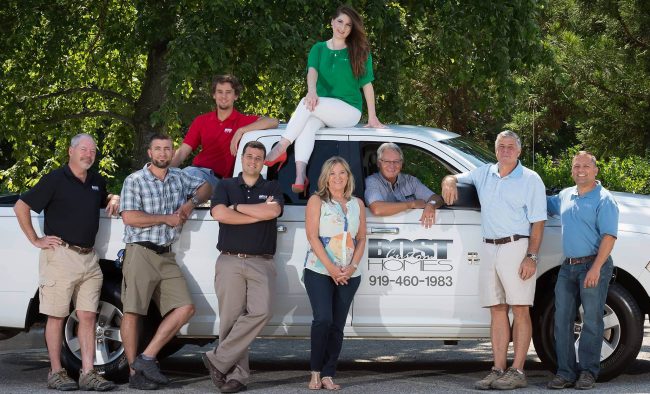 Rex and Evan Bost of Bost Custom Homes are focusing on tech to deliver next-level homes to their clients.

The evolution of Bost Custom Homes began three decades ago, and as the company celebrates its 30th anniversary this year, it is continuing to find ways to innovate.

Bost Custom Homes president Rex Bost built his first home in 1987 after working in the stone masonry business. In 1999, he built his first $1 million home, which marked a big turning point in the Raleigh-Durham, N.C. market, as homes of that magnitude were becoming more prevalent. Bost’s masonry-framed design was the first such home in the market of that scale, making him a pioneer of that technique there.

Since 2004, the company has been known as a luxury builder, focusing mainly on homes that are $1.2 million and up, completing between seven and 10 a year. And, tech increasingly is becoming an important aspect of their builds.

“We do spend time talking about technology with our clients,” says Rex Bost. “We don’t try to push it on them, but we want them to understand what’s available and make sure that we future-proof the homes so there’s proper wiring in place for the next level of technology when it comes along.”

Regardless of whether a client wants few or many tech options in their homes, all Bost homes are pre-wired at least with Cat6 and coax structured wiring.

“We always tell them that pre-wiring for everything is a smart investment for resale purposes or if their opinion changes over time,” adds Bost Custom Homes marketing specialist Evan Bost. “And, we usually try to get a couple of controlled lighting areas in the house. Some clients bite on it, some don’t.”

Lutron is the Bosts’ general choice for switching, shading and light control. For clients who opt for a full-home automation, Control4 is the primary system.

The Bosts see tech as becoming an integral piece in home building, especially in the LUX market. So, they are taking a major step in trying to educate their clients on the possibilities of a connected home.

The company is building a $3.2 million, 7,000-square-foot model home in a luxury neighborhood that will be the most advanced home the Bosts ever have built. The Lodge at Avalaire will include features like a full Control4 system, distributed video and audio throughout the house, a motorized pocket door through INMOTION, a self-playing baby grand piano that connects to the whole-home audio system, solar power and energy monitoring. They also hope to add voice control in the home and a Wi-Fi irrigation controller.

Construction on the home will be completed in September, just in time for it to become a stop on the Wake County Parade of Homes in October.

“Some people think we’re crazy because we’re building a $3.2 million model,” says Evan Bost. “But, the neighborhood is right, everybody’s been hungry for this and it’s gorgeous land. So, the location is right for a home that we can showcase to the market what’s possible.

“And, that’s really what we’re aiming to do with it – blow the doors off every other home that’s going on in the Parade and educate people on what is possible. So, that’s why we think it’s important to put every option in there because people can’t want what they don’t know is available. So, we’re going to show them what’s available and hopefully get more clients interested in higher tech options.”

Rex Bost says technology has changed dramatically in the last 10 years, but there really hasn’t been an opportunity to showcase the latest and greatest. So, this model home presents a great opportunity.

“I’m having the most fun I’ve had in a long, long time because I’m a very creative soul and it’s given us an opportunity to be really creative,” he says. “And, I’m looking forward to dazzling our clients and the public with some new ideas and concepts, but even more importantly being a leader in building the home using sustainable products.

For Bost Custom Homes, the company is about more than just buildings. It is also a true family business. Not only does Rex employ his son Evan, but his wife Brenda also is the company’s financial controller and unofficial “office mom.”

However, the familial nature of the office goes beyond those who have the Bost last name. Rex believes it’s important for everyone to have a sense of togetherness, especially in a company as small as his.

“Life is about relationships no matter what industry you’re in,” he says. “I think with that connection of caring, we’re very fortunate. We’re a successful small company. If we were 50 people, it would be a lot tougher to do. But, there’s only eight of us, and we do all care for each other and we do keep up with each other personally.”

Part of having such close-knit relationships is that it allows them to build trust, which is a key component of making things run smoothly at Bost Custom Homes. Each member of the company has the power to make judgement calls in the field and take ownership of the projects they’re on, which helps everyone remain engaged and take pride in their work.

“Most custom building companies are somewhat chaotic, and there’s a little bit of controlled chaos that goes on with custom building no matter how organized you are,” Rex Bost continues. “But, I want the workplace to be an environment where our employees look forward to coming to work and look forward to giving input, and we’ve seen great results from that.”