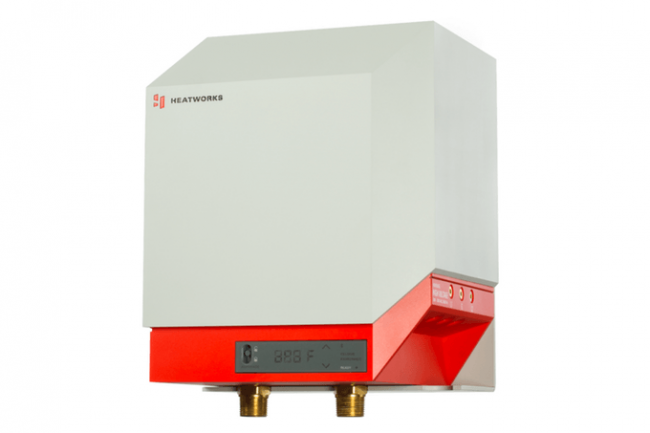 Company turns to crowdfunding for its connected Model 3.

As Heatworks looks to revolutionize the water heating industry, the company is launching a crowdfunding campaign on Kickstarter for its new Model 3. The tankless heater promises to deliver purer water more efficiently than what traditional water heaters can provide.

“We’ve replaced that with graphite electrodes that serve as a mechanism to actually heat the water,” says Heatworks marketing manager Melissa Verzwyvelt. “So, it’s a much purer way to heat the water and, because there isn’t the metal that rusts inside our family of water heaters, we have no maintenance.

“So, typically you’ll have to call a plumber to replace your heating elements midway through its lifespan, but with ours you don’t have to do that because ours doesn’t rust.”

By removing the metal heating element, there is no longer the possibility of sediment building up in the bottom of the tank when it corrodes. That means cleaner water and a lifespan that is longer than other heaters.

Another physical benefit of the heater is its size. At just 12” x 12” x 12” and weighing only 15 pounds, its compact footprint makes it a much more versatile unit compared to traditional heaters.

“The beauty of that is that instead of having to take up that typical 4’ x 4’ space in a garage, they’re actually able to install this in master bedroom closets, underneath sinks, really almost anywhere,” says Verzwyvelt.

The Model 3 also is WiFi enabled, which offers many valuable options for its users. Through the Heatworks app, they can do things like program the temperature to heat the water to within one degree of their preference and control the length of showers.

There are also helpful tracking features within the app. Those allow users to monitor their water and energy usage and compare them month to month. It even will show savings on those bills in monetary form. Heatworks says the Model 3 can reduce the overall cost of heating a family’s water by about 40 percent.

The Model 3 Kickstarter drive launched on May 1st and is live through June 15th with a goal of raising $125,000. The money collected through the effort will go toward field testing the product and bringing it to market.

Those who do take part in the campaign can purchase a Model 3 for $389, which is 35 percent off the retail price of $599. It also comes with the standard six-year full unit replacement warranty.

“It’s just a really cool model,” says Verzwyvelt. “I think because of the size and the smart app, it’s going to be a force to be reckoned with within the industry. Also, because it’s this new technology that’s unlike anything else on the market, it’s pretty fabulous.”

The Model 3 water heater tentatively is expected to go on the market late in the summer.