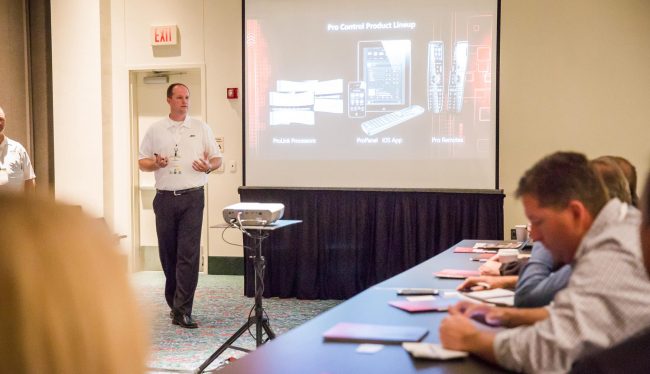 The typical show floor environment was nowhere to be seen at this year’s TecHome Builder Summits in Fort Worth, Texas, and the home tech vendors whose products lined the aisles certainly noticed the difference.

Meaningful conversations were wholly the norm at this year’s Summits, which took place from December 7 to 9 at the Fort Worth Convention Center. From one-on-one meetings to intimate boardroom settings, vendors were able to share an experience with builders and potential buyers that escapes the chaos typically seen at a standard trade show.

“This is the first time that we’ve attended the show, and we’re very pleased with the quality of the companies that have come and the knowledge of the individuals coming to our booth. They know what they’re looking for. They anticipate the next generation of technology going into the industry. They’re really looking for companies that can help support that,” says Michael Chester, CEO and president of Curtis Mathes.

During meetings, vendors discovered that this year was especially rife with eager industry builders looking to learn about the latest technologies. The event gathered luxury, high-volume and multifamily builders—the first year these three sectors have been co-located.

It’s a concept that Jim Light of Hunter Douglas finds better than the typical arrangement. “For me, and for our business, it’s valuable to interact with all three,” says Light, national accounts manager for the window coverings company.

Hunter Douglas won an inaugural TecHome Brilliance Award at this year’s event for Best Shade and Window Control. You can see a full list of this year’s winners HERE.

This interaction is embraced by others as well, especially in relation to the tailor-made meetings, boardrooms and education sessions that allowed vendors and builder to interact on a truly personal level.

“We really like the one-on-ones and the workshop general sessions, where we get to collaborate. I’ve seen a really high level of engagement with the builders here, and it’s a great way to start a conversation,” says Wolf of ChargePoint.

The organization of these components also prove appealing to the vendor mindset, where missed meetings can translate to missed sales.

“You’re taking attendance!” exclaims Rita Carbone-Lawson, national sales manager for Delta Products. “We were promised a certain number of people and you make sure those people showed up. I’m very impressed with the way things are run like clockwork. Everybody knows where they need to be.”

Overall, builders in attendance were looking for what Curtis Mathes’ Michael Chester referred to as “the next generation of technology” and the “companies that support it.”

“They’re all looking for a differentiating item that they can put into their home or multifamily properties to give them the next advantage over the competition,” says Chester.

Due to this mindset, as well as an ever-evolving industry, Jonathan Stovall of Energy Squad believes that the builder group is extremely valuable to his company at the moment. Having been on both sides of the table due to his work as an integrator, Stovall knows how business meetings usually work at other events—hands are shaken, business cards are exchanged, but the reality of closing a deal is forgotten almost hours later.

“Not here,” says Stovall. “I imagine we will be doing business with a lot of these folks.”

Stovall also finds immense value in the way builders were being educated at the event, a factor he believes will further increase acceleration, acceptance and sales of home technology. He cites a specific session where Mitchell Klein of Z-Wave spoke about the issues of interoperability.

“The interoperability discussion was amazing. It just opened a lot of eyes to the mass confusion that’s out there with buyers,” says Stovall.