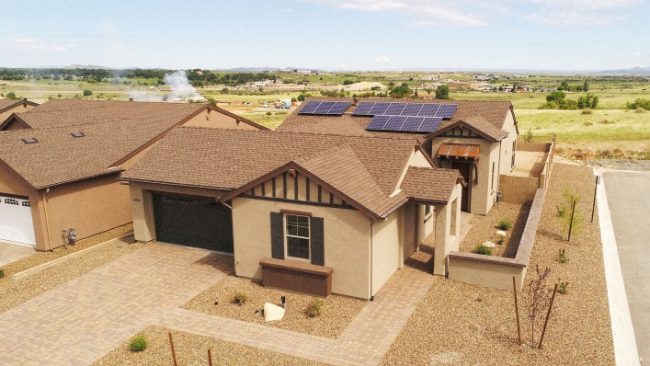 Since first meeting at the 2016 TecHome Builder Summit, the homebuilder and energy storage company have embarked on a development that may revolutionize how electricity is used.

Prescott Valley, Arizona will soon be home to a world-class community featuring thousands of homes and a carbon neutral footprint that has the potential to reshape the electric grid. And, it wouldn’t have happened in this form without the TecHome Builder Summit.

When completed, Mandalay Homes’ Jasper development will consist of 2,900 homes, each with local renewable solar. The project will be done in phases, with the first consisting of 600 homes. Mass dirt work is just getting underway and the first homes could be completed as early as late 2018. The first phase will take around three years to complete.

That is due to the builder’s new relationship with sonnen. Every Jasper home will incorporate a 10 kWh sonnen battery, which can store enough clean energy during the day to power the home through the night.

While thousands of homes in sonnen’s home country of Germany use this energy saving technology, Jasper will mark the official launch of the sonnenCommunity USA. In a sonnenCommunity, the homes are interconnected through their batteries, creating a cloud-based virtual power plant and allowing them to work as a hive to support the whole grid of Arizona.

Not only will this community help homeowners save on their electric bills and HOA fees, due to zero energy costs for common areas, but it could become a blueprint for clean energy solutions in other parts of the country, too.

“Certainly the consumer benefits are amazing,” says Mandalay Homes chief technology officer Geoff Ferrell. “I’m going to sell a ton of homes. My homeowners are going to get the craziest benefit by having these sonnen batteries in their home. But, the true innovation is that interaction, that change in relationship with energy and how we view energy and how we use energy.”

“This master-planned Jasper community represents the single most significant innovation in how new homes can contribute to the decarbonization of our electricity grid,” adds sonnen senior vice president Blake Richetta. “The 2,900 homes in which the sonnenCommunity will be deployed in Prescott Valley represent a true clean energy revolution, setting a new standard in energy efficient communities that will challenge the status-quo associated with the US electricity grid.”

Since the announcement of the sonnenCommunity in October, Mandalay Homes and sonnen have received calls from Arizona’s two power companies to discuss the potential of finding ways to utilize that renewable energy and shift the way energy reacts with the grid. Ferrell says the utilities weren’t initially sold on the idea, but they now may be opening up to it.

That would mean the Jasper community would create savings at all levels, including the individual home, the community and the grid.

“That’s the drive of innovation that I’m really constantly looking for,” says Ferrell. “More power in less, more efficiency across the board, and we’re going there. I am always to going out and searching for that, and I was able to find a partner in sonnen who has been awesome. Finding those partners who want to make the world a better place, that’s what gets my blood pumping.”

“I was interested in finding a builder group that would be interested in seeing this tremendous opportunity,” Richetta adds. “In my head, I believed this was the way this could work in America, especially considering we don’t have the easy return on investment for someone to make their money back on an energy storage system like there is in Germany. So, I thought, if I could just start with a couple builders that are really innovative and really on the cutting edge of energy building, then maybe I could get something going.”

In Mandalay Homes, that’s exactly what he found at the 2016 TecHome Builder Summit. At the time, he was in just his first week on the job at the company when he made his 10-minute pitch before one of the general sessions. He says his presentation was driven largely by passion because he deeply believes in what his company is striving to achieve. And, Ferrell noticed.

“When I saw him talking at one of the luncheons about the things the sonnen battery does and the sonnenCommunity, I knew I needed to go talk to him,” Ferrell recalls. “So, when I started talking to Blake, I said, ‘I’m a production builder. We build hundreds of homes a year. Here’s what we have going on.’ Blake lit up, and said, ‘We need to talk.’ And, it’s been a really great relationship ever since.”

“So, here I am asking to find a couple builders that are really innovative that also would be willing to standardize on something like this in a development,” says Richetta. “I never in my wildest dreams could have imagined that I would have met Geoff. I met someone who is more innovative than the custom home builders that are talking about building the most incredible homes of the future.”

This relationship is helping Richetta and his team make sonnen even better. He has invited Ferrell to visit his company’s factory and talk with its engineers to offer his thoughts on things like design, objectives and interface. Richetta says Ferrell’s drive to find new ways to create energy solutions is a big part of why the two work so well together.

“He’s got passion. It’s not about what he’s doing. It’s why he’s doing it. And the vision for why he’s doing something is in his heart. And, what’s important to me is that that’s the same way I am. If it wasn’t for that, we wouldn’t be as good as we are together.