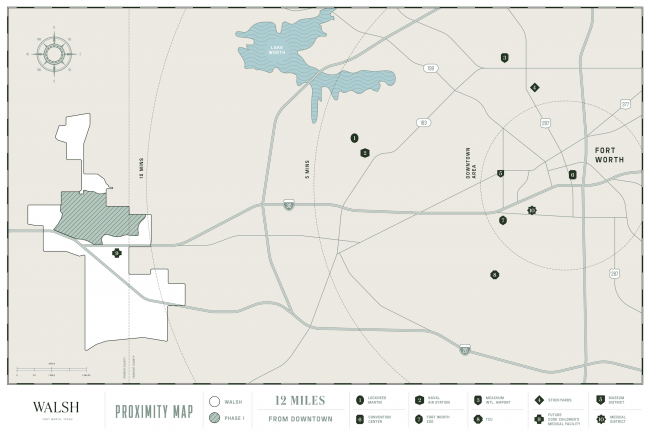 The massive Fort Worth development keeps an eye toward the future by making sure to prepare for the tech of tomorrow.

In the shadows of downtown Fort Worth, Texas is what is currently a large construction site. Eventually, it will become home to about 50,000 people and will be a driver of technology.

The neighborhood of Walsh is an ambitious project. When completed, it will consist of 7,200 acres – roughly the size of lower Manhattan. The land is situated 12 miles west of downtown Fort Worth at the intersection of Interstates 20 and 30. It is zoned for 15,000 single-family detached homes and eight million square-feet of commercial space.

But, a project this large can’t be built overnight. It will be constructed in phases, but will take anywhere from 40 to 50 years to finish completely.

With a such a lengthy timetable, it can be difficult for project leaders to anticipate where tech will go, but they are doing everything they can to make sure they’ll be ready for it.

“We’re going to have generations of people and buildings being built there and innovation that’s going to happen,” says Michael Voll, the project’s lead technology consultant and CEO of Frog. “So, when you look at technology for what the community is going to need in its lifetime, you have to not only consider the technology that’s being used today and what’s on the horizon for five or 10 years from now, but the stuff that’s going to come that we haven’t even fathomed, the stuff that’s coming in the next decade or two decades.”

Technology is going to be a centerpiece to the appeal of Walsh. With its fiber network, it will be the first community in the country that will have two gigabit internet speeds as minimum connectivity for all homes and schools. Upgrades to 10 Gbps will also be available.

“It was really important to us right out of the gates not to have just a roadmap to 10 gigs, but to be truly at 10 gig,” says Republic Property Group co-CEO Tony Ruggeri. “So, when you move into your house at Walsh, all you have to do is pick up the phone and call and say, ‘turn me up to 10 gigs.’ And, they flip a switch on the back end. There’s no additional equipment. Everything is already 10 gig ready.”

To ensure the homes can handle the multi-gigabit speeds, now and in the future, each home will have Cat6a wiring. All homes will also have a wireless access point pre-wired in the ceiling in a center location, with requirements for one on each floor and one for every 2,000 square feet.

Other amenities within the Walsh community also are being designed to support residents coming together and growing with tech. There will be a Makerspace to provide public access to tools, manufacturing and 21st century technology, as well as a co-working village with full internet connectivity so residents can work in a shared space.

In addition to traditional neighborhood recreation areas like pools, parks and hiking and biking trails, Walsh will feature an Imagination Playground. It will include all the classic playground components for kids, but the inclusion of tech will bring the interactivity to a new level.

“All the traditional things like the swings and jungle gym can come to life and turn into musical instruments with sensors,” says Ruggeri. “So, you can bang on the jungle gym or slide down the slide and it makes different musical sounds or animal sounds.”

“We’re moving people away from interacting with screens and mobile phones and touchscreens to being able touch a railing and having that cause an interaction, or step on a certain board on the sidewalk and have that trigger something that’s happening,” says Voll. “But, it’s this idea that now sensors and interfaces can be embedded in physical things that lets us blend the natural built environment and the technology environment.”

The playground is being designed by award-winning architect David Rockwell, and will also include some unique non-tech features, like large foam blocks and other loose parts, that will encourage children to develop their own inventive and creative ideas.

Ruggeri and Voll share the belief that because there is no clear winner in the home automation space yet, they don’t want to commit to a neighborhood standard that could become antiquated or have security issues down the road.

Instead, they want to make sure all Walsh’s future residents have all the infrastructure in place to install any TecHome devices they want to have in their home.

“I really, really hope we have tons of people wanting to do that kind of stuff because, overall, our goal for this project is for Walsh and Fort Worth to be known around the country as a place for innovation,” says Ruggeri. “As a resident, we want you feel comfortable that for as long as you live in Walsh, there are no limits to what you can do.”

“It’s because they don’t have the availability, that resource, that they’re not using it today,” adds Voll. “So, I love seeing the inspiration that it brings out in people, and the excitement. So, we’re really eager to see what the first residents do with it.”