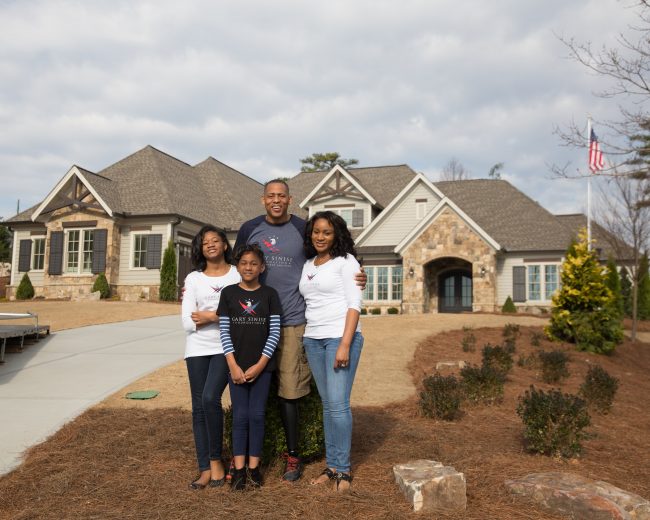 Some soldiers who serve their country return home to face a much different quality of life than what it was when they left. And, that’s the reality one U.S. Army veteran from Atlanta faced.

Master Sgt. Cedric King (Ret.) was serving his third deployment in Afghanistan in July 2012. While conducting a reconnaissance mission in an Afghan village, King’s unit came under machine gun fire.

After the firefight, he moved forward and stepped on an improvised explosive device. The blast resulted in the loss of both of his legs and disfigurement of his right hand.

Working with Atlanta Audio & Automation, the Foundation installed a fully ELAN Entertainment and Control System that controls the home’s audio, video, lighting, security and more.“We are honored to recognize Cedric’s service with this customized specially adapted smart home that really does give him a new level of independence,” says Gary Sinise Foundation executive director Judy Otter. “Since his injury, Cedric has persevered, earning numerous medals and awards, he’s run marathons and even climbed mountains. Cedric is a true inspiration and an American hero.”

An ELAN gSC10 controller serves as the system’s hub, and is accessible through TP7 touch panels in the master suite and living room, as well as a HR200 remote.

Among the features integrated into the network is an extensive Lutron lighting and climate system, which includes 24 dimmers and two thermostats.

The King family can control the lighting and temperature manually through the ELAN interface with the touch of a screen or automate their functionality.

The Kings’ smart home wouldn’t be complete without an impressive array of entertainment options. A S1616A Multi-Room Controller operates an extensive audio-video system, distributing music and video to six different locations throughout the home.

The surround sound system includes Niles DS7HD and DS7FX in-ceiling speakers and three Sunfire HRS10 subwoofers. Outside the home, a waterproof Séura television was installed on the patio.

“We built a sophisticated smart home that is highly functional and jam-packed with exciting entertainment features,” says Atlanta Audio & Automation’s Phillip Ampel. “It truly offers Cedric and his family an elevated level of freedom – and fun.”

There are also devices in the home that were installed to protect it and its smart infrastructure.

Six IP cameras placed throughout the property can be accessed instantly from anywhere. Any member of the King family can check on the security of the home through any touch panel or through the ELAN Mobile App.

To protect the equipment itself, installers relied on a Panamax M4315-PRO Power Conditioner with key components protected by a Furman F1500 Uninterruptible Power Supply. Both feature BlueBOLT energy management. This equipment will protect the system from catastrophic surges and dirty power.