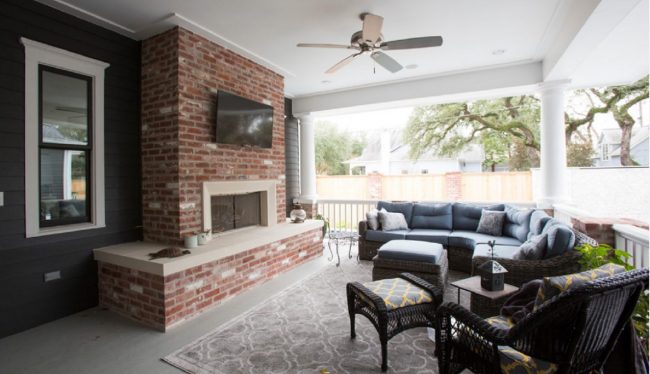 Luxury builder David Gordon knows the appeal of outdoor spaces is just as hot as the Houston-area weather.

“It’s so warm and people really want to be outside, so what people are doing is combining the outdoor spaces with the swimming pool,” says Gordon, president of Whitestone Builders. “They are basically building their own oasis.”

Gordon aims to conquer this oasis concept with his own projects, and it has paid off. Whitestone is currently a nominated finalist in the 2016 Star Awards from the Texas Association of Builders, in the category of “Best Outdoor Living Space.”

Gordon states that he wasn’t surprised to receive a nomination for the luxury home project, confident in its overall execution that stemmed from great architecture and unique design.

“However, it was a surprise that we got nominated for an outdoor area, because this was the first time we were ever nominated for something like this,” says Gordon.

“We have been nominated in previous years for bathrooms, kitchens, designs and other stuff, but it was really nice to finally be recognized for an outdoor area.”

In order to achieve this award-nominated space, Gordon points to a holy trinity of sorts when it comes to this type of project. Together, these three components craft the ultimate outdoor area.

First up is an outdoor fireplace, which Gordon states is always a plus. “Even though we are in a warmer climate, there are still a number of months were you can use the fireplace to warm the area outside,” says Gordon.

In addition to the fireplace, Gordon cites two other crucial areas—a raised porch area with a built-in outdoor kitchen and a swimming pool. Combined with additional tech such as lighting and speakers, these three factors will have homeowners constantly flocking outdoors.

“For a large party, these elements are great for entertaining, because you have three separate areas where people can hang out with their friends and talk,” says Gordon.

Already proud of Whitestone’s achievement, Gordon will have to wait until the Sunbelt Builder Show—running August 3 and 4—to find out if his company is taking home the ultimate prize.

The Texan builder show consists of networking, vendor showcases and concludes with an evening dinner and awards show. Here, Gordon will find out if Whitestone has won for its own outdoor oasis.